The Crux of the Eastern Mediterranean Dispute: The Megisti Island Case

The Crux of the Eastern Mediterranean Dispute: The Megisti Island Case January 18, 2022

by Cem Demirci
Download PDF
The maritime delimitation problem in the Eastern Mediterranean and other disputes related to the Aegean Sea have been the source of chronic tension between Turkey and Greece since 1974. The newly discovered oil and gas reserves, estimated to be 879 million barrels and 286.2 trillion cubic feet, respectively, have added another layer to the long-standing tension between the two countries [1]. The territorial claims of both countries are shown in Figure 1. 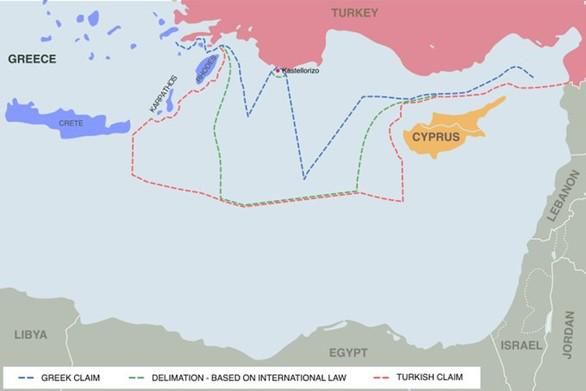 Figure-1 Territorial Claims of Turkey and Greece in the Aegean Sea (prepared by Yunus Emre Açıkgöl)   [2]
A discussion about the causes of and the solutions to the dispute from the perspective of international maritime law is difficult because of the political atmosphere in both Turkey and Greece. For example, the authoritarian leadership of Turkish President Recep Tayyip Erdogan has undermined the ability of the government’s institutions to produce rational and reasonable policies to address the issues involved in the dispute. The dispute has instead been used by Erdogan as a domestic policy issue to promote a nationalist sentiment through government-controlled media. Greece, meanwhile, has adopted an opportunist and maximalist approach to the Eastern Mediterranean dispute by relying on a mechanical interpretation of Article 121 of the United Nations Convention on the Law of the Seas (UNCLOS), which conflicts with the ruling by the International Court of Justice (ICJ) and its arbitrational tribunal.
Turkey's irredentist and assertive foreign policy under Erdogan and the choice by some E.U. members to support the position of the Greek government, despite the inconsistencies in its claims, have created significant obstacles to resolving the maritime delimitation dispute in the Eastern Mediterranean. The perception, among some government officials in Greece, that Turkey is a state with expansionist tendencies has further complicated attempts to resolve the dispute between the two countries. On the face of it, the claims of Greece about Megisti Island (labeled as Kastellorizo on the map shown in Figure 2) are very strong, given that Article 121 of the UNCLOS explicitly recognizes the full maritime rights of islands within the 200-nautical-mile Exclusive Economic Zone (EEZ) if those islands are above the sea level and suitable for human habitation  [3]; however, the equitable and proportionality principles of international law restrict the rights of islands, which are close to other states’ shores and have distortive effects on the delimitation of the maritime zones. To illustrate the point, two similar cases decided by international courts are examined: (1) Delimitation of the Continental Shelf between the United Kingdom and the French Republic and (2) St. Pierre and Miquelon Maritime Boundary Case between Canada and France.
The Anglo-French Continental Shelf Case (1977)
According to the principle of proportionality, the baselines of the states that have claims to overlapping maritime zones should not be determined by the location of the islands on the opposite side of the median line. In the Anglo-French Continental Shelf Case(1977), France objected to giving full maritime entitlement to the British Islands, which are situated 14 miles off the coast of France, by asserting that such a maritime entitlement would be “wholly disproportionate to the size of the Channel Islands and the length of their coasts  [4].” The tribunal court did not accept the contention that two different methods—the special circumstance rule and the equidistance method—could be used to delimit maritime boundaries. The court, however, concentrated on the distortive impacts of the irregular formations of the islands, which cause anomalies in the delimitation of maritime boundaries between opposing or adjacent states. The court also agreed with the French argument that giving full maritime zone entitlement to the British islands would have a negative impact on the maritime, defense, and security interests of France. The court’s decision is shown in Fig. 2. 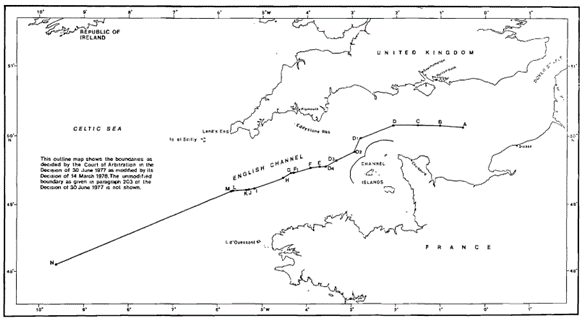 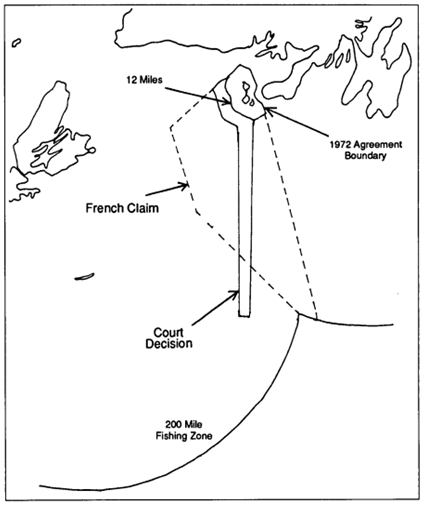 Figure-3 The Decision of the Arbitration Court in the Canada-France St. Pierre and Miquelon Maritime Boundary Case in Which France Was Granted a 13.8-Mile Exclusive Economic Zone for St. Pierre Island and Miquelon Island   [5]
Conclusion
As summarized in the above two cases, Greece’s claims related to Megisti Island are not fully supported by the principles of international law. Instead, Greece gives great importance to maximizing its EEZ around Megisti Island, which would enable Greece to connect the EEZs of its islands with the EEZ of the Greek Cypriot administration. Chrysochou and Siousioura argue that the position of Greece on Megisti Island “is vital for the Greek national interests, as its influence if recognized, can connect the Hellenic EEZ to the Cypriot EEZ  [6].”  That connection would enable Greece to reduce the chances that Turkey could benefit from the natural resources in the Eastern Mediterranean. Both the Anglo-French Continental Shelf Case and the Canada-France St. Pierre and Miquelon Maritime Boundary Casedemonstrate that the decisions of the tribunal court and the arbitration court do not support the claims of Greece regarding Megisti Island. Erdogan’s expansionist foreign policies in other regions prevent Turkey from establishing a regional platform from which it can seek equitable solutions to the maritime delimitation dispute under international law. Therefore Turkey, which has the longest coastline in the Eastern Mediterranean, has had to rely on military operations to protect its rights in the area. Turkey’s inconsistent political and legal stances have made it difficult for the country to rely on other peaceful dispute-resolution methods. The maritime delimitation agreement between Turkey and Libya also is problematic in that it ignores the EEZ rights of Crete Island and Rhodes Island, both of which are in compliance with the criteria (such as population, size, length of the coast) related to the islands’ maritime zone entitlement.
To move forward, Turkey should reset its Eastern Mediterranean policy by relying on the principles of international law and work with Greece to give up its maximalist approach. The consensus in the international community is that the provisions of the UNCLOS have gained the status of customary international law. Therefore, it is neither reasonable nor sustainable for Turkey to preserve its “persistent objector status” (i.e., the clear and consistent objection of a sovereign state to a norm of customary international law) over the long term. Also of concern is the UNCLOS provision regarding the nature of the regime of a disputed island. The provision is problematic because it does not produce equitable solutions for islands, which in turn creates geographic anomalies with respect to the maritime delimitation rights of the mainland coast. The creation of such anomalies is the main reason why the tribunal court intervened in the Anglo-FrenchContinental Shelf Case and the arbitration court intervened in the Canada-France St. Pierre and MiquelonMaritime Boundary Case. Both courts saw the need to prevent the unfair interpretation of the UNCLOS provision on delimitation.
Greece also needs a reset. It can do this by abandoning its maximalist maritime policies in the Eastern Mediterranean and considering the impacts of the court's rulings about the fair interpretation of Article 121 of UNCLOS regarding the maritime rights of Megisti Island. Turkey’s Mavi Vatan (“Blue Homeland”) doctrine, which was developed by retired Turkish admirals rather than maritime law experts and is based on the claim of a vast maritime domain, contains significant fallacies about international law. The doctrine has been a substantial obstacle to the establishment of an effective negation mechanism among the countries in the region to determine the maritime boundaries in the Eastern Mediterranean. Turkey should abandon the Mavi Vatan doctrine and develop a holistic approach to maritime delimitation in the Eastern Mediterranean. A key element of that new approach is reliance on regional cooperation and adherence to the international rule of law.
Footnotes:
[1]  USGS 2020. Assessment of Undiscovered Conventional Oil and Gas Resources in the Eastern Mediterranean Area.
[2]  Yunus Emre Açıkgönül wrote on Twitter: “Working with a graphic designer, we developed a more accurate version of my #EastMed delimitation map with better visuals. Again, drawing a map with full accuracy requires time and map expertise. My maps give the general idea based on int law. Small inaccuracy should be tolerated. ”https://twitter.com/yeacikgonul/status/1308146761777713152" / Twitter.
[3]  According to Article 121, Regime of islands:
1. An island is a naturally formed area of land, surrounded by water, which is above water at high tide.
2. Except as provided in paragraph 3, the territorial sea, the contiguous zone, the exclusive economic zone, and the continental shelf of an island are determined according to the provisions of this Convention applicable to other land territories.
3. Rocks that cannot sustain their own human habitation or economic life shall have no exclusive economic zone or continental shelf. https://www.un.org/depts/los/convention_agreements/texts/unclos/part8.htm
[4]  Anglo-French Continental Shelf Case (1977) 18 RIAA.
[5]  LIVINGSTONE, E. 1994. A Tale of Two Islands: An Analysis of the Court of Arbitration'sDecision in the Canada-France Maritime Boundary Dispute. DalhousieJournal of Legal Studies, 3.
[6] SIOUSIOURAS, P. & CHRYSOCHOU, G. 2014. The Aegean Dispute in the Context of Contemporary JudicialDecisions on Maritime Delimitation Laws, 3.

Orion Policy Institute (OPI) is an independent, non-profit, tax-exempt think tank focusing on a broad range of issues at the local, national, and global levels. OPI does not take institutional policy positions. Accordingly, all views, positions, and conclusions represented herein should be understood to be solely those of the author(s) and do not necessarily reflect the views of OPI.

Withdrawal of US Military from Afghanistan: Risks and Responses

The withdrawal of US military from Afghanistan has been on the presidents’ agenda over the last decade. The decision to actually do so, however, has been delayed multiple times because of the U.S. con
Read More

Is Relying on Military Interventions against Terrorism an Ineffective Strategy to Eradicate Insurgency?

Op-Ed | In the hotspots of terrorism and insurgency, responding to terrorism by relying heavily on hard power such as military and police responses are not effective to reduce terrorism in these locat
Read More

Limitations of Security Sector Reform in Countering Al-Shabaab in Somalia

Op-Ed | Over the past few years, al-Shabaab’s insurgency in Somalia has gained strength despite the significant amount of foreign assistance dedicated to security sector reform (SSR) in the country.
Read More

Op-Ed | The comprehensive sanctions on the Maduro administration have become the centerpiece of the U.S. strategy for Venezuela. Yet, "maximum pressure" policy revolved around sanctions dramatically d
Read More

Op-Ed | Relations between Turkey and Qatar have flourished within the past decade, particularly after the 2017 Gulf boycott against the latter. Yet efforts by Ankara and Doha to normalize diplomatic r
Read More